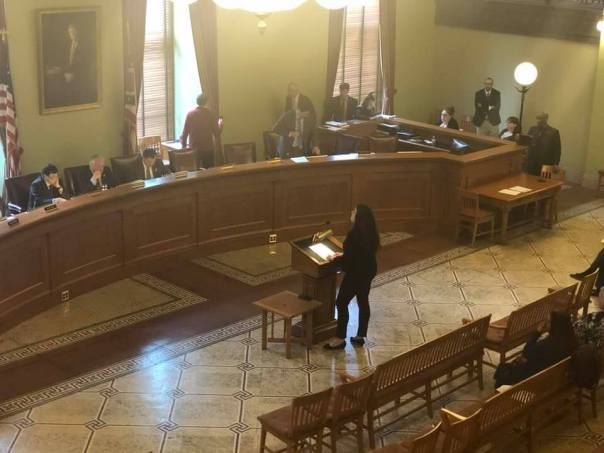 HB 137, as proposed by Representative Bernadette Kennedy  was signed into law on March 20, 2019. This bill amended Section 2151.42 of the Ohio Revised Code to make municipal and county police officers mandatory reporters of abuse and neglect.

Mandated reporters are required to make a report of suspected abuse when they have reasonable cause to suspect that a child or teenager is a victim of abuse. Every state has in our nation has statutes identifying which professionals who have frequent contact with children and teens are required to report suspected maltreatment.

Prior to this legislative victory, Ohio was the only state in the nation that didn’t include police officers on its list of mandated reporters.

Speaking as current and former foster youth, who serve as statewide leaders and community volunteers, we strongly supported this bill. Testimony was shared by several of our members, including Jessica Camargo and Lisa Dickson.

We were able to testify from personal experience that physical abuse comes with a feeling of powerlessness. To experience abuse without intervention gives children and teens a scary message about their personal worth and what to expect from other people.

The National Fraternal Order of Police and many other law enforcement officials supported this bill.  Their support demonstrated that they viewed the responsibility of reporting abuse and neglect as central to their jobs — and statistics bear out that this is absolutely true.

After HB 137 became state law, we initially discussed next steps for “level setting” —  getting everyone on the same page, in order to provide consistency in terms of response to abused children and teens in our state. We had talked about trauma-informed training, mentorship and support, and reminding police officers to view teenagers not as perpetrators, but as victims of abuse. Including a focus on Best Practice, and identifying officers to serve as mentors and role models. Here is a list of possible concepts that we considered for inclusion.

***Update: Prior to March 19, 2019, Ohio was the only state in the nation that didn’t include police officers on its list of mandated reporters. With this in mind, it makes great sense in terms of timing that, three years later, in March of 2021 House Bill 4 is proposing to take the next step forward by requiring cross reporting from public children services and law enforcement in order to prevent child abuse cases from falling through the cracks.

Our members are happy to provide proponent testimony once again.  Lisa Dickson and Jessica Camargo have already submitted theirs in writing.